I surveyed the Dad’s Guide to Twins Facebook community and asked if twins were your first children. 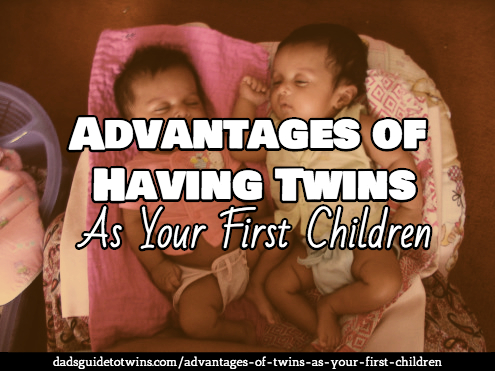 Now as you all were answering this question, it made me think, well, what are some advantages of having twins as your first children?

Many of you said that you had an instant family. Perhaps if you have struggled to have kids, and found out that you were having twins, that may have just been what you were wanting so badly. Boom! You’ve got a family of four.

Two for the Price of One

Others of you commented that you got two for the price of one. This made me smile, because it reminded me of comments my wife made when she was pregnant with the twins, and after they were born. Even though the twin pregnancy was the most difficult of the pregnancies that she had, she did get two babies for all that pain instead of just one.

When twins are your first kids, one advantage that you have is that you are ignorant of just how hard it’s going to be. You don’t know any other way. You don’t know that having a singleton baby is easier, because you don’t have a singleton baby. All you know is the reality that’s in front of you, and that is twins. If you’re going to have subsequent kids after twins, that’ll seem like a walk in the park.

Another advantage of having twins as your first children is that both mom and dad get involved from the beginning. Because twins require everyone to help in the home, you can’t let mom do all the work, or dad do all the work. Mom and dad both get to participate fully in caring for and raising the twins.

Twins as your first children also will garner more sympathy from others like family and friends. You can use that to your advantage to pile up the necessities and help that you’ll need in your home.

I talk more about taking care of your twins in my book, the Dad’s Guide to Raising Twins: How to Thrive as a Father of Twins.

This topic was originally addressed on the Dad’s Guide to Twins Podcast Episode 85: Advantages of Twins First vs After Other Children, Newborn Sleeping Arrangements. Original photo by Ankur P

4 thoughts on “Advantages of Having Twins as Your First Children”