This question comes from Carol. She asks, “What do you do when you go to the grocery store? Where do you put all the kids, especially if you have the two car seats with the infant twins?” 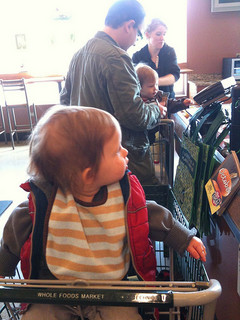 So this was the case with us. We had infant twins, and they were both still in the car seats in infant carriers. Ideally, both my wife and I would go shopping at the same time. That way we were be able to help push two carts where one of us pushed the kid cart and one of us push the grocery cart. So this would, of course, have to be after work or on the weekends when we are both available.

Or alternatively one of us would stay home with the kids, while the other one would go out to do the errands. Now, as you know if you already have kids, going shopping and running errands usually goes a lot faster and is a lot easier when you’re by yourself, when it’s just the adults and not the kids.

So if you want to stay home while your spouse goes shopping, it’ll help make that a lot easier.

Of course, that’s not always a reality. In this case, mom is going to need to go out, go shopping when dad’s not available. She’s going to have to do it by herself.

So when I was at work, my wife would wear one of the twins in a BabyBjorn carrier, and she’d put the other in a car seat in the cart. Some shopping carts, you can just snap those in there, and they fit in nicely in the basket if you’re worried about them tipping over. Sometimes she would have to put both of the twin carriers in one cart. One would snap in where the other kids sit in the basket, and she would pull another cart behind her or push it ahead of her just for the groceries and for the things she was purchasing.

So it made quite the visual caravan of kids because oftentimes she was with the twins, the infants, as well as our two older boys who were hanging on the carts or running along behind her. The good news about shopping is that eventually the kids are going to become self-sufficient. They can walk or they can sit in the cart itself, and so this will no longer be a problem. But for a season you have to make do with what you have, either having multiple carts, or using infant carriers on your person, like a sling or the Bjorn to make it easier to get around in the store.

One of our favorite stores is Costco, because the carts are so big we can actually have room for both kids to sit at the same time, but not all stores are going to be that way. So you have to scope out the type of arrangements that your favorite grocery stores have and then bring the appropriate baby carrying equipment with you, whether it’s two infant carriers, a sling and a carrier, or something else.

2 thoughts on “Where Do You Put All the Kids when You Go to the Grocery Store?”