Our question today is: When is the best time to have a twin baby shower? 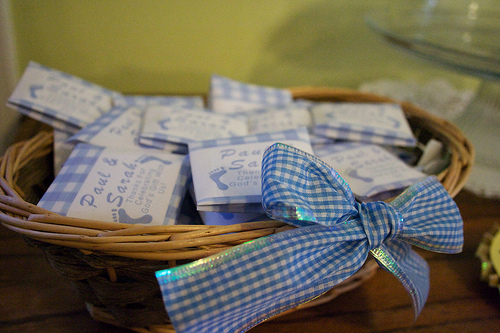 Planning a Baby Shower for Twins

Generally when you look at a twin pregnancy, just like all pregnancies, there’s 3 trimesters: The first, the second, and the third. Typically the first trimester you’re still at a high risk of losing one or both babies; this is true with any pregnancy. I know with our kids, we tended to wait until after the first trimester, after 12 weeks, to announce the pregnancy to family and friends. This gave us a lot more confidence that, yes, the pregnancy was going smoothly and that, yes, we could start planning for the babies, which included having a baby shower.

If you wait until the third trimester, things start to get crazy, especially with a twin pregnancy because you risk early delivery of the twins. You risk Mom being on bed rest and not able to go to a baby shower, or maybe it’s not comfortable for her. The longer in the pregnancy you go, the higher those risks become where Mom will be more tired and fatigued, and she’ll be physically a lot larger and more uncomfortable getting around.

You ideally want to plan for your twin baby shower near the end of the second trimester; maybe somewhere around 26 to 28 weeks. You definitely want to have it by 30 to 31 weeks at the latest, because you want to get that baby shower out of the way before Mom’s on bed rest, before the twins arrive early. Definitely don’t wait too long, or those babies may show up before you’re ready for them.

For example, I had a coworker who had twins, and the baby shower that we planned for him and his wife at work ended up being after the twins were delivered, because we waited too long to schedule the baby shower, and they came. The twins came early, they ended up spending time in the NICU; it was an unforeseen early arrival. That’s another reason why you should plan to have your baby shower for the twins a little earlier in the pregnancy.

Of course, it’s always okay if you decide that you want to wait until after the babies are born. If you find yourself too far along in the twin pregnancy and it may be too much of an inconvenience or risk, go ahead and postpone it until after. You will still need a lot of the baby supplies and the things that your friends and family will buy for you at a baby shower in those newborn stages. It is comforting and more convenient to have those things set up before the twins arrive, but you’ll still need diapers and supplies after your twins are born.

If you have other kids, you might expect social etiquette would say “You’ve already had babies so you don’t need another baby shower.” But remember that twin babies break all the rules. You can have another baby shower, even if you’ve had one before with a previous child or previous children, because with twins, you’re going to need extra of everything. Even if you have one car seat already, one bouncy seat already, you already have clothes from your previous child or children; you’re going to need extra for the twins. People are more empathetic to that, and they understand that twins are going to require more out of you and require more resources to help them.

Check out my book, the Dad’s Guide to Twins: How to Survive the Twin Pregnancy and Prepare for Your Twins for more ideas to prepare for your twins’ arrival.