Do identical twins look exactly the same? A big concern that parents of identical twins have is how do you even tell them apart, particularly from the moment that they’re born. 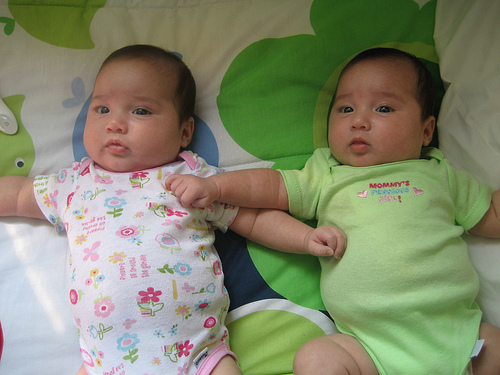 We have identical twin girls. When they were born, I was fooled a lot at first. I’d look across the room and I wasn’t quite sure which twin was which.

Identical twins do have different variations in physical appearance, and mannerisms, and personalities. When our girls were first born, there were some slight differences physically between the two of them. One of them had skin that was a little redder than the other, which probably had to do with time in utero, or time of delivery because that redness didn’t last more than a week after birth.

Another difference in our two girls was the size. One of girls was slightly heavier than the other girl. They were about the same height or same length, but one was a little bigger than the other. Although that gap started to close as well when you bring the twins home and the babies lose weight initially, then they start to gain their weight back as they start to feed successfully.

There are some slight birthmarks on our girls that helped differentiate the two of them. These birthmarks weren’t permanent birthmarks, but rather red spots on different parts on their face and on their body that were unique on each of the girls to help us distinguish them.

Another factor that helped us distinguish the two girls was fingernail scrapes. Even inside mom, their fingernails are growing, and sometimes they will scratch themselves or scratch each other, and so when they are born they will have little scrapes that will turn into scabs. Those will be unique on each of your children.

All of those things were kind of temporary, a lot of them are associated with being together inside mom, or they are associated with delivery and so, over time, those physical differences started to fade. Several things you can look for in helping to tell your twins apart will vary over time. In the beginning, it may be physical differences due to birth.

And then it starts to move into something different. For example, you can start to see the types of expressions that your twins make in their face or with their bodies that are distinct, one from the other.

When your twins start to talk, the way they verbalize the words and their thoughts, their voice will be different and you’ll start to see that distinguishing factor even between identical twins because you’ll also notice how they speak differently. They’ll use different words or different pronunciations and you’ll start to pick up on the quirks and the differences between them.

Another big difference between your identical twins will be personality. Though they look the same on the outside, they have very distinct and unique personalities. And so, they’ll have different likes and dislikes and even different propensity to cry or to be fussy or to laugh at your jokes, whatever the case may be.

Twins tend to also switch personalities sometimes. We saw that in our girls, as well. But as they continue to grow and age, you’ll notice that each of them has a unique personality.

You can also give yourself some hints as to which twin is which. One thing that we did was we would color code the clothes that our girls wore. One of our girls wore warm clothes, reds, pinks, oranges yellows. And the other girl wore cooler colors, blues, purples, and greens. That helped us to distinguish at a glance who was who that we were holding or feeding or dealing with or seeing across the room.

Once your twins start to grow out their hair, another thing you can do is style their hair differently. This is something that we did with our daughters. Like I mentioned before, we color coded their clothing. But over time, they started to have a preference of what they wore. And so, then we switched to different hairstyles. One of our girls had a very short haircut and the other one had longer hair to help not only us, but friends and family easily distinguish which daughter was which.