We got a question about whether twins develop faster than a single child because they can feed off of each other’s progress and development. 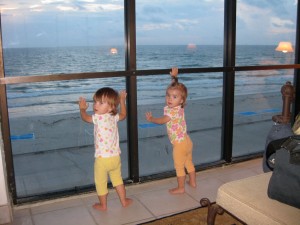 The answer here is not necessarily. They’re not necessarily going to develop faster than a singleton child would. Remember, of course, that each twin is unique and they won’t necessarily follow the same development course as each other. You’ll see that even though twins may be identical, they will pass their milestones at different times.

Now, of course, your babies are going to go through several different milestones. It could be physical milestones like teething, rolling over, sleeping through the night – and these are oftentimes based on an individual twin and their physical progress and not necessarily the experience of his or her sibling or environmental factors. Usually, children develop at their own certain pace.

On the other hand, I feel like skill-based milestones like walking, talking, reading, and so on tend to be more influenced by peer pressure and what the sibling may be doing. They can definitely feed off each other’s progress in that regard, particularly if you as a parent are positively praising the progress that one of your kids is making. The other twin is going to see that praise and want some of that same attention. That can be used to your great advantage. When one of your twins starts to do something that you like, praise that twin verbally and reinforce the behavior they’re doing to encourage the same behavior in the other twin.

Twins May Be Behind

Twins typically are born earlier than singleton babies, and as such, they may have a slower development track than a singleton baby. If one of them starts a certain development later than a typical singleton would and if you’re waiting for the other twin to follow suit, both of them may be delayed longer than you were expecting. In that case, having twins may not accelerate development one to the other because they’re both lagging behind what a singleton’s schedule may be.

If you are concerned about the progress of your twins or one of your twins, talk to your pediatrician about the physical and mental development cycles that they’re doing. With each well-baby checkup and well-child checkup, you should get a really good picture from your doctor of the types of things that your children should be doing at that level and of the things that you can work on with them as a parent to help develop their motor skills, their speech and their development as you go along.

This topic was originally addressed on the Dad’s Guide to Twins Podcast Episode 66: Crying Twins, Pace of Development, Infant Activities.