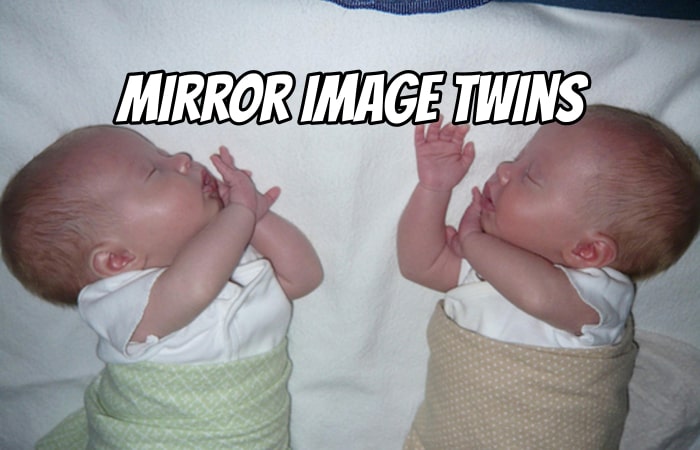 About 25% of identical twins are mirror image twins.

Your twins may also have physical features that make them look like they are looking in the mirror when they face each other.

Are your twins mirror image twins?

Let’s explore what that means…

What is a Mirror Image Twin?

Only identical twins can be mirror image twins.

So if you have fraternal twins, sorry, they can’t be mirrored. (Although hopefully, that was obvious).

Identical twins are monozygotic which means they both originate from the same fertilized egg which then splits during the first few weeks after conception.

In the case of mirror image twins, this split happens a little later than typical identical twins. By the time the split occurs, the embryos are starting to form left and right sides. This likely leads to some mirrored characteristics.

While mirror image twins share many opposite characteristics, they aren’t 100% opposites.

For example, mirror image twins may have mirrored features like:

In very rare cases, internal organs may be mirrored. However, if you have mirror image twins, you’ll likely just see some of the features listed above.

How Do You Know If You Have Mirror Image Twins?

There is no official test your twins can take to determine if they are officially mirror image twins. Since they are identical, their DNA is the same.

In fact, that “mirrored” determination is really in the eye of the beholder and isn’t an official designation of twins like say “fraternal twins” or “identical twins”. Mirror image twins are just a type of identical twin.

What characteristics do you see in your twins that mirror the other? If they have several, you can claim them as mirror image twins.

The whole idea of mirror image twins may be a misnomer since your twins won’t be exactly mirror images of each other. Sure, they have mirrored characteristics but never would everything match up.

Once you start to identify some mirrored characteristics, it becomes a fun game to see what else you may find.

With our identical twin girls, trips to the doctor or dentist are always interesting as they often reveal some mirrored tendencies. For example, our girls’ molars first started coming in on opposite sides of their mouths.

Our girls also have natural parts on opposite sides of their heads.

It has gotten to the point when opposite parts of their bodies mirror each other, we aren’t even surprised anymore.

These nuances are often subtle but fun to catch and highlight to our twins.

Would total strangers notice all these mirror image characteristics in our twins? Or yours? Not likely without a close examination.

Do you have mirror image twins? What made you realize that was the case?

3 thoughts on “Do You Have Mirror Image Twins? (Here’s how you know)”