Since our girls are identical twins, one big fear we had was telling them apart. To that end, we made sure that we rarely dressed our twins alike. 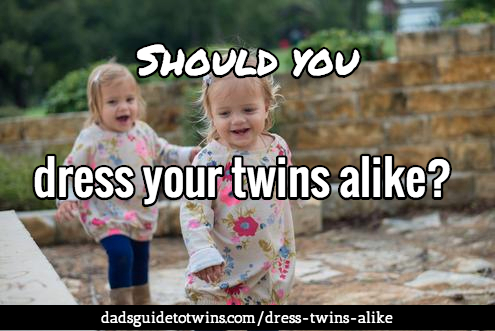 This pattern continued for more than a year until they started to express their own preferences around 18 months. Once they could dress themselves independently (between ages 2 and 3), we’d end up with them wearing whatever they wanted (matching or not).

During the first several months, things were so crazy that we were lucky to get them dressed in more than just a onesie.

We would dress them alike for special occasions, like going to church or for pictures. However, each would have a subtle difference like a different color bow in their hair. In those early days when they really didn’t have any hair, we’d use headbands.

You should help others identify your twins. Dressing your twins alike makes this more difficult.

Keeping the twins straight and knowing who is who is one thing. That being said, it is fun to dress them up the same. Why? Because they are twins!

When you dress your twins alike they actually look like twins. If you didn’t get comments from others before, you will when they are dressed alike and look the same.

During the infant months, your twins are at your mercy as far as what they wear and how they match each other. Should you dress them alike? Go for it. Keep in mind that it may impact their perception of individuality. If you always dress them the same, think about how else can you encourage individual preferences and styles.

As our girls have gotten older and realized what “twins” even are, they like dressing up similarly, looking in the mirror, and proclaiming “twins!” Depending on your twins personality, they might enjoy the attention that dressing alike brings.

When you take your twins out in public and they aren’t dressed alike, people will actually ask you if you do dress them the same. I guess they are just so intrigued by the fact that you could dress them up identically since that isn’t something that most parents get to do.

I talk more about dressing your twins the same and other identity issues in Chapter Seven of my book, the Dad’s Guide to Raising Twins: How to Thrive as a Father of Twins.

What have you done with your twins? Do you dress them alike? Always different? What’s worked in your family? Leave a comment and let us know.

2 thoughts on “Should you dress your twins alike?”