Jen asks, “What would work for getting the twins to go to sleep on their own at night?” Now, Jen, getting twins to sleep is definitely one of the hardest challenges that we face as parents of twins, and I hear about that from a lot of parents like you who are struggling to get their twins to get in a good sleep routine. 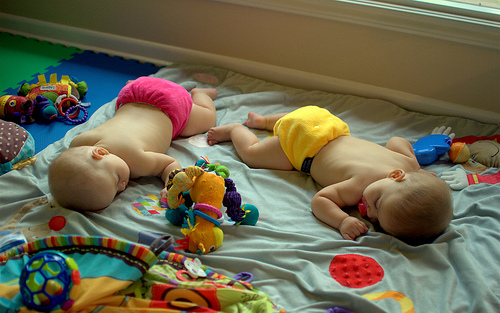 One thing that we’ve found very successful during nap time is that we would separate our twins so that they would not disturb each other. It seems like nap time was different from bedtime at night where the twins would keep each other awake during nap time. But at nighttime, I don’t know if they’re just exhausted and they’re ready for bed, but it didn’t seem to be as big a problem as it was at nap time. So, we would separate them at nap time. Put each one in a different bedroom. One would go in our bedroom, one would go in their bedroom, and they’ll usually fall asleep fairly well and they wouldn’t disturb each other. If one twin for whatever reason was awake and was active, they didn’t disturb the other from getting a good sleep.

Now, you can also consider using this same tactic that we use at nap time for you at nighttime. Once your twins fall asleep you can then both transfer them to their crib and to their bedroom. We did this as well for a little bit where we would put our girls down to sleep. Again, one in our master bed and one in their bedroom, and then when they’re both asleep, then we’d make sure that they are both put in their proper place.

Reassure Your Twins at Bedtime

For a time when we tried to get our twins to fall asleep in their own bedroom, we had a season, probably a couple of months, where either my wife or I had to stay in the bedroom with our girls after we put them down in their cribs. We didn’t rock or feed the twins to sleep, but we would simply reassure them. If they got upset or if they started to cry, then we would lay them back down in their crib. So, they knew that we were there in the room and they had that reassurance and it helped them to calm down more quickly than if we simply put them in the cribs and walked away.

Over time however, we were able to gradually work our way out of the room and ultimately we didn’t have to wait with them once we put them down since they were used to just falling asleep on their own. Now, this is kind of a stretched out process, but it helps to break any old, existing habits that your twins may have. It helps to get them to go to sleep by themselves. It’s OK to be in the room initially, to comfort them, be with them, soothe them, but definitely put them right back in the crib so that they can realize that it’s time for bed and we need to go to sleep and you’re not going to soothe them to sleep.

This question was originally addressed on the Dad’s Guide to Twins Podcast Episode 48: Research on Cesarean Section vs. Vaginal Delivery + Getting Twins To Sleep By Themselves.