Michael wrote in to say that his twin sons have just hit the nine-month mark and they’re having a really tough time sleeping at night. Poor Michael and his wife have tried, it seems, a million different ways to help the twins fall asleep. Let them cry it out, feed them closer to bedtime, try to sneak out of the room. They thought maybe it was the diapers. Maybe it was trying to get them on the same schedule. They also tried the bedtime routine. 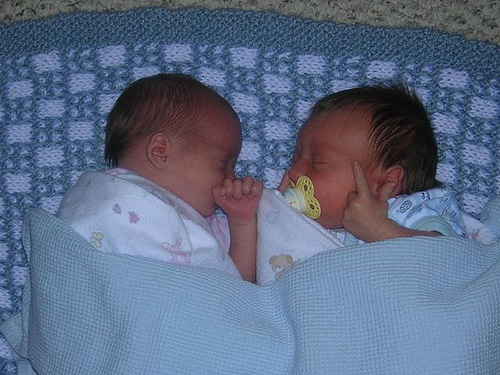 They’ve been trying all different things and they’re pulling their hair out trying to get their twins to fall asleep and get a good night’s rest. I know this is a huge challenge with twins because just through the natural course, it’s going to be a challenge to help them sleep through the night. And so, you want to get them to sleep.

I know we had to do that for a season with our daughters. They would be in different rooms. They would fall asleep on their own, separately, and then once they were asleep we transferred them back into their cribs.

Another thing that worked well for us is a dream feed that we would give our girls when they were infants. They would get their regular feeding before they would go to bed. Now, before my wife and I would go to bed we’d get the twins out of their beds and feed them one last time before we went to sleep. Most of the time our girls were half asleep during this feeding but they were still able to drink some milk. This seemed to hold them over until the morning, to help them sleep through the night.

You might want to try some of these different methods and see what works best for your twins.