Having twins is not for the faint of heart. It’s natural to be scared, but what option do you have but to man up and take courage? 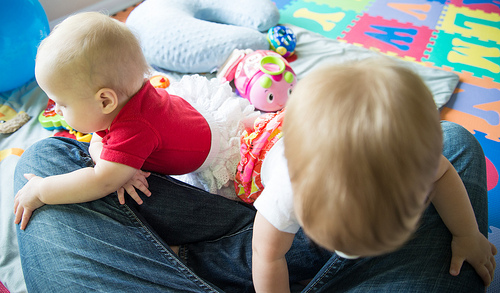 It’s going to be really difficult at first, but the good news is that you eventually get the hang of it. And just when you’re getting used to things is when those little ones decide to move on to the next stage and shake things up. You have to be on your toes all the time or you’re left scrambling and not able to cope. But such is the story of fatherhood in general; it’s just double the adventure in your case because you have twins.

If you’re wondering what the secret is to be a good dad of twins, you already have an essential part of it right. Caring enough to want to be a good dad is key. Mind you, good doesn’t mean perfect. Perfection is an illusion that parents must learn to eschew or they’ll just make their entire family miserable. So how does one become a good father of twins?

Fathers, in general circumstances, are often relegated to a supporting role in terms of caregiving and parenting. When multiples are involved, you can forget finding yourself in a similar situation.

Dads of twins have no choice but to take on a more active role in caring for their babies if they want it to be done more efficiently and in a timely manner, and definitely if they don’t want to earn the ire of their wives.

If you’re going to be as hands-on as possible, there are some things that are certainly useful for you to know to prepare you for the life of a father with twins:

Schedules are your lifeline. It’s one thing to be baby-led when you’re dealing with one infant, but when dealing with multiples, you need better structure so that no one suffers.

Twins are not clones. Do not expect them to be exactly the same, especially in their development, and don’t compare them. It’s hard enough being one of a set without having to worry about unfair expectations of them.

They will attract attention. Multiples are fascinating, so just learn to deal with the attention without suffering too much of people’s impertinence, e.g. “Are they natural?” There are people who would suspect that your twins were the result of you and your wife tampering with your fertility, and actually have the audacity to voice out their thoughts. Stay classy despite the aggravation and your children will learn grace from you.

Twins are expensive. You need two of many things, and you’ll probably need to upgrade to a minivan. If you have more kids, your resources will be seriously depleted. You’ll have to learn to buy wholesale, use coupons, and just generally be more frugal. It’s imperative that you always have your financial game face on or you may soon find yourself in debt.

You’re the father of twins. You can expect the ride to be filled with challenges, but you can also expect special moments at every turn. So do the best you can to perform your role well while enjoying everything as much as you can.