This question is about a preparation that you need to make before your twins arrive. And that is, “How do you design a nursery to fit both of your babies?” Well the simplest way to have a nursery that fits both babies is to keep the room as simple as possible. 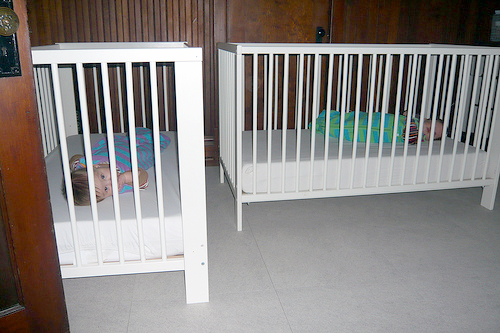 You Don’t Need Two of Everything

You of course as a parent will be bombarded by marketing messages and advertisements trying to convince you that you need a lot of baby care to care for your twins. And that’s not really the case. So let’s try to keep it simple. Get one dresser for clothes, or if you have a closet you may be able to get away with just putting clothes in the closet. You’ll probably want a rocking chair of some kind. And you just need one. You don’t need two of those. And if there’s not room in the nursery for the rocker you can put it out in your main living area.

Consider getting a very simple changing table that’s small enough to fit in your room or you may even consider making one yourself that combines both shelving or dresser space for clothes and a changing table on top.

When our twins were born we started them both in one crib, and they had only one crib in the nursery. And our twins did fine in that situation. However, recent medical research indicates that you should really put both your twins in separate cribs to help avoid any risks of Sudden Infant Death Syndrome. Now even if you were to start your twins in the same crib, they can’t stay in the same crib forever. Our girls lasted maybe three or four months before we had to move them into their own cribs.

So your nursery plans need to include how are you going to get two cribs into the space because your twins will need that eventually, if not from the first day that they arrive home. How you configure these two cribs in the room could make the difference of whether everything fits or not in the space that you have. We started our girls in cribs that were kind of side-by-side with a little walkway between them so it was easy for my wife or I to walk down the middle and be able to look in and soothe both twins at the same time.

Eventually we ended up moving the cribs to opposite walls of the nursery so that the girls wouldn’t interfere with each other, wouldn’t try to reach out and touch each other and talk to each other when it was really time to be sleeping. You can always put them in the same corner of the room, maybe in an L shape on different corners of the room but then there is the risk that the twins will try to disturb each other as they rest.

If you’re feeling adventurous there are double-decker cribs. But these double-decker cribs are typically used in large daycare locations and aren’t really for home use. Although if you’re really short on space, you can probably make them work for your home.

For more tips on preparing for your twins’ arrival, check out my book, the Dad’s Guide to Twins: How to Survive the Twin Pregnancy and Prepare for Your Twins.