One question that I get a lot is: how do you know if your twins are fraternal or identical twins? 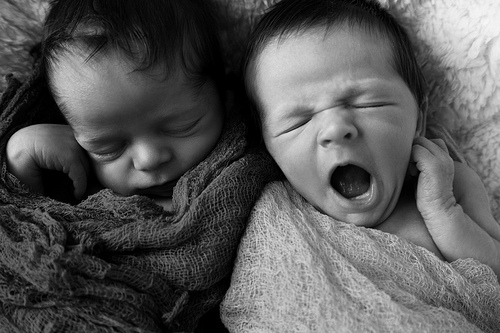 If you’ve got a boy and a girl that are twins, then congratulations! You’ve got fraternal twins. That’s easy enough, and yet at some point–trust me–somebody will ask if your boy/girl twins are identical.

If you’ve got boy/boy or girl/girl twins, then things aren’t quite so simple.

When twins are fraternal, two eggs are fertilized at the same time, so it is possible that you still get a pair of same-gender twins even though they aren’t identical. More on that in a moment.

If you’ve got boy/boy or girl/girl twins, you may have identical twins.

The trick is determining whether boy-boy twins or girl-girl twins are truly identical or if they are fraternal.

If you have twins of the same sex, oftentimes there’s little to no way that you can tell until after birth, through blood typing or DNA testing if they are identical or fraternal.

Your same gender twins may have the same or similar physical characteristics such as hair color, eye color, facial features, etc. that give you clues to if they are truly identical or not. However, as a parent, even your identical twins will begin to look different to you as you get to know their personalities.

During the twin pregnancy, the ultrasound doctor may give you the odds that you have fraternal or identical twins. By looking at how the babies are arranged in their amniotic and chorionic sacs, the doctor may be able to tell what you’ve got in the oven.

Since you’ll have several ultrasounds due to the twin pregnancy, take advantage of the opportunity to see what the doctor thinks you’re expecting and why. Of course, they’ll never tell you that they’re 100% sure of anything, but they can tell you how things generally turn out in their experience. 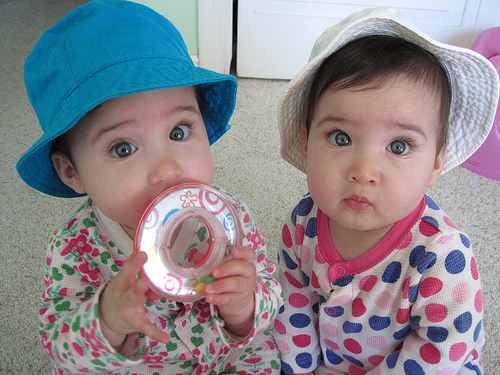 First of all, MoMo twins, monochorionic monoamniotic twins, have one amniotic sac and one placenta. This is a very rare and a very, very high risk pregnancy situation. We’ve talked about MoMo twins on the blog before. MoMo twins are always identical twins.

The second type of twin, MoDi twins, monochorionic diamniotic, have two sacs but share one placenta. This type of pregnancy does have a higher risk of TTTS, twin-to-twin transfusion syndrome. These twins are always identical.

However, even with the advances of ultrasound, sometimes it’s hard to tell on ultrasound if there are two placentas or if one has simply fused together and they look like just one on the ultrasound. If the twins are the same gender, there’s really no way to know in utero, just from the ultrasound, if they are really MoDi twins or DiDi twins.

DiDi twins are the third type of twins that you can have. These are dichorionic diamniotic twins. There are two separate sacs and two separate placentas. This is the lowest risk of all the twin types of pregnancies. These twins can be either identical or fraternal. If you find out in utero that they are the same sex twins, then there’s really no way to know if they’re fraternal or identical until after they are born.

They may look very similar or very different upon birth or you can have their blood typed. Of course, if they have different blood types, they’re going to be fraternal twins. Or you can ultimately do a DNA test to see whether they’re truly identical or fraternal. The only sure way to tell if your twins are fraternal or identical is to get a DNA test.

Regardless of whether your twins are identical or fraternal, you’ll have unique challenges with their twin identity. You’ll find several tips for managing your twins’ identity in Chapter Seven of my book, the Dad’s Guide to Raising Twins: How to Thrive as a Father of Twins.

This question was originally addressed on the Dad’s Guide to Twins Podcast Episode 31: When Twins Prefer Mom Over Dad, Separating Twins in School, Fraternal or Identical.

Pictures by love_K_photo and Ruth L