I surveyed the Dad’s Guide to Twins Facebook community and asked, “how early did you find out you were having twins?” The results were quite interesting. You might be wondering just how early can they tell if you are having twins? 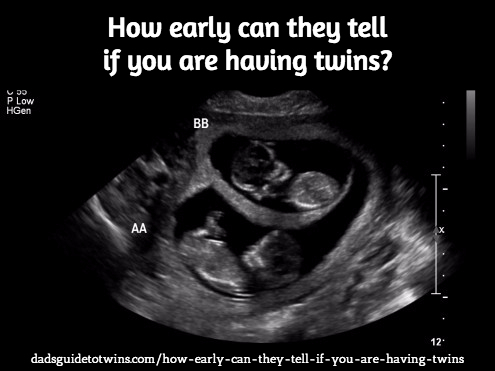 If you just get a blood test to confirm the pregnancy you may not find out at that time. However, more and more offices have ultrasound equipment and they don’t have to send you out to a different lab or office to get an ultrasound hence you might find out right away. This is how we found out we were having twins on our first doctor visit which was about six to eight weeks into the pregnancy.

We were completely surprised. In fact I wasn’t even there with my wife because I thought it was just a normal, “Yes, you are pregnant, have a nice day,” type of checkup, when in fact it was something that would change our lives forever!

When I asked how far along you were in your twin pregnancy when you found out that you were having twins, the average was about 11 and a half weeks, which is nearly the end of the first trimester.

The earliest you found out was about five weeks into the pregnancy and the latest was 27 weeks.

That’s pretty good spread of time when you found out that you are having twins. The average was towards the end of the first trimester, which is typical for many parents I’ve heard from as well.

This topic was originally addressed on the Dad’s Guide to Twins Podcast Episode 84: Fatherly Advice, Sleep Regression, When Found Out About Twins. Original photo by bhenak

16 thoughts on “How early can they tell if you are having twins?”