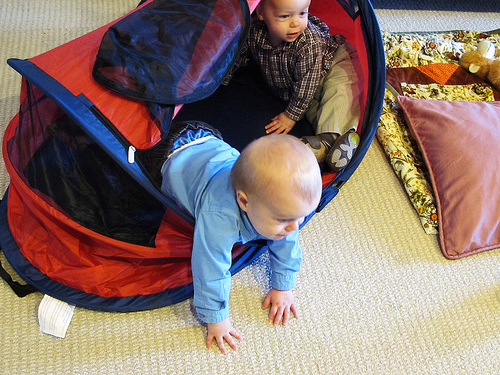 This question comes from Lakeisha. She has 4-month-old twins, and she asks, “How long did it take your girls to become friends, or even know that there was another twin there?”

Not Much at First

I think that four months is a little too early for them to really know what is happening around them. As infants, we found that our girls would snuggle into each other as they slept in the same crib. But that seemed to be kind of reflexive, since they were probably doing this kind of activity while they were still inside Mom waiting to be born. Each set of twins is different, but look for them to start recognizing each other and acknowledging that there is somebody else there between four to six months.

Remember that infants get distracted very easily in early months. The attention span is extremely short. So even though they may notice their sibling, their twin, they may not focus on that sibling for much more than a few seconds. Now, at around eight months, more or less, the competition begins. So this is when the twins should be crawling around, and when one twin is not getting something that they want because the other twin is getting it, they’re going to start to notice that. So they’ll think, “Hey, obviously this person is here and they’re taking something I want,” and they might not be too happy about that.

Our girls would play and interact with each other, but it wasn’t until they could actually talk that they started to play together a lot and be friends. So, they had their own little gibberish, their own little language that we wouldn’t necessarily understand. But once they could start to babble to each other and start to understand each other, and ultimately when they started to speak clearly, that’s when they would do more playing together.

So once you get into the toddlers ages and beyond, your twins, especially if they’re the same gender twins like ours are both girls, they’re going to do a lot of play together. So, in the very early months,your twins are probably not going to pay attention to each other. As their needs evolve, they’ll realize that the other twin may be getting attention when they want it. But ultimately, they’ll start to play together and interact with each other, and then they’ll start to get into trouble, into mischief together, and that’s part of the fun of having twins.

This question was originally addressed on the Dad’s Guide to Twins Podcast Episode 42: Separate Twin Bedrooms, Being a Useful Husband, Twins as Friends.