This question is something that each of us with twins struggles with regardless of the age as soon as they start interacting with each other. “How do you stop twins from fighting?” 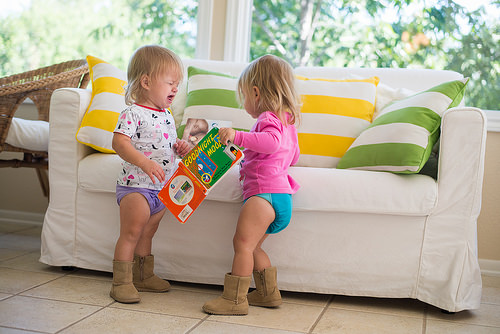 If your twins aren’t fighting yet, just wait, and it’ll start.

They may fight because they’re always together, they’re in the same space, they’re the same age, or perhaps have conflicting dispositions. Regardless of the reason, your twins will end up fighting one way or another.

Here are a couple of things that you can try to help keep your twins from fighting.

First is calmly tell them that when they fight they cannot be with each other.

We used this multiple times with both our twins and their older brothers as well.

If they are doing something that isn’t appropriate we’ll separate them and then redirect them to other activities.

For example, I’d say “When you fight (or when you hit or when you kick) you cannot be with us.” And we’ll then separate them and move them to something else.

This also leverages an important technique called the “distraction technique” which works wonders, especially when your kids are very young. They may want something or to do something but you can easily put a new shiny object in front of them and it gets their mind off of what they were fighting about.

Prevent Your Twins from Fighting

Don’t just think about how to keep twins from fighting in the moment of fighting. You can prevent fighting before it begins through how you interact with your twins during the rest of the day.

Reinforcing good behavior will then encourage them to want that approval and that reward in the future instead of seeking your attention through fighting.

Let Your Twins Be Different

Another thing that you can do to prevent fighting is to not force your twins to do everything together. Make sure that they’re allowed to have their own individual space and time and interest in activities.

Let them pursue their different hobbies or interests that they may have. For example, with our girls, we put them both in soccer together and one of our girls loved it and the other didn’t dropped out in favor of another activity.

Don’t pile on your twins with unnecessary comparisons. It’s going to be very easy to compare one twin against the other, how one is behaving against the other. Don’t try to foster that feeling of comparison of who’s better than the other. That may trickle down to the twins where they then use that against each other in their fights and their verbal disagreements.

So how can you stop your twins from fighting? In the moment, separate them, and set expectations.

Before the fight begins make sure you praise good behavior and encourage good situations where fighting won’t be something that they would want to do.

3 thoughts on “How to Keep Twins From Fighting”