This is a guest post from fellow father of twins, Tom Williams.

A common thought among first-time dads of twins is the Neonatal intensive-care unit (NICU). I had no experience with any of this before my twins came. 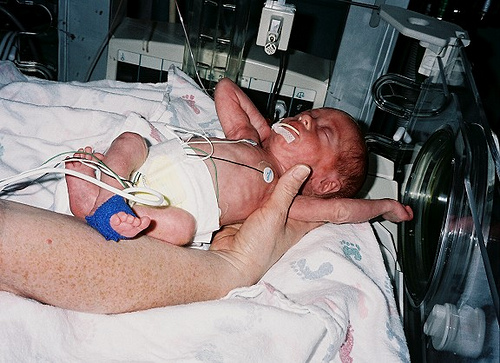 My twins were due 9/21/09. My wife’s water broke, for reasons still unknown, at 29 weeks and 2 days. I was at work (two hours away) and sped to the hospital, where she had been given her first dose of steroids (to help with lung development) while waiting for an ambulance transport to take her to a hospital with a Level 3 NICU.

We got to the Level 3 hospital, and she was given more doses of steroids and more medications to hold off labor while the steroids were given time to work. Twenty-four hours after they stopped the anti-labor medications, my wife went into labor. I was, once again, at work.

I got to the hospital, found out that she was in labor (she didn’t want to tell me because she didn’t want me doing 90 mph the two hour drive again). A few hours later, we were taken into an operating room so she could get an Emergency C section, as Landon was in the birth canal, but Carden was transverse across my wife’s uterus on the top.

At 10:01 PM on 7/13/09 we met our boys and our world changed. The boys were born and were whisked away by NICU staff to be checked out before my wife even got a chance to see them or hear their cries.

A few minutes later (it seemed like a lifetime) they were wheeled back in so we could touch them, see them, and meet our sons for the first time. We didn’t know it, but we were in for the worst six weeks of our lives.

The boys were taken up one floor to the NICU. Around midnight, I was able to go up with my mother-in-law and see them. There were so many wires and tubes. It was one of the scariest sights of my life. I still get flashbacks when I see premature births or NICUs on TV. It’s one of those things you never forget.

The wires and monitors were the scariest. When the boys were first born, they were hooked up to oxygen as a precaution. The monitors watched oxygen level, breath rate and heart rate.

The biggest concerns are apnea (not breathing), desaturation (low blood oxygen level) and bradycardia (low heart rate). Monitors watched all of these things, and set off alarms when the levels went below a pre-set. That sound haunts your NICU visit, as does the monitor.

Once I was able to hold them, after many weeks, I would find myself not looking at my sons, but at the monitor, scared, waiting for something to happen. Fortunately, one of the great NICU nurses reminded me what mattered: to focus on the little person in front of me, and how incredible he was. To focus on all the amazing things that he has done, instead of worrying.

That is what you need to do: Don’t focus on the bad things of your NICU stay. Focus on the good.

Our boys came home, albeit a week apart. We found dual inguinal hernias on Landon the day before he was scheduled to come home, and he had an apnea after the surgery. Hospital policy was that he had to maintain five days without incident before he could go home. Major setback.

Because of this we encountered something you just might encounter: one twin will probably come home first. You will get used to having one baby home. Then a few days, maybe a week or two later, after you have gotten your schedule set with one baby, the game changes. And you have become a family.

For the first time, after many weeks, you finally feel like a family. You will realize that you have no idea what you are getting into, but you will learn really quickly.

You have no choice when you have twins. You are both worn thin. You will have parents of single babies coming up to you with comments like, “Oh, it must be so tough!!!”

10 thoughts on “How to Survive Preemie Twins and the NICU”