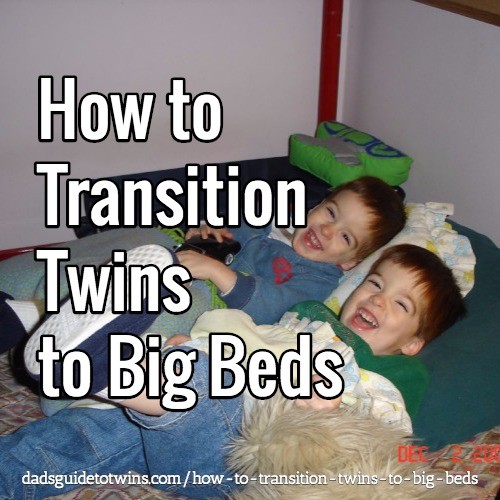 How do you know your twins are ready to move out of their cribs and into a bed? They tell you.

Just how they tell you is what makes this part of twin parenting interesting. Moving twins into beds can be quite the adventure.

Your toddler twins might ask about a bed, or mention how they don’t like their crib anymore, or may even show you they can be left unsupervised safely. However, your twins might just show you by their actions. Just like our girls.

When our girls were a little past two years old, my wife and I were talking on a Sunday night when we heard a thump from the girls’ room. I went to investigate and found one of our girls standing next to her sister’s crib, talking with her.

I put the jail breaker back in her crib and said good night. Almost as soon as I closed the door, I heard that same thump sound. I went in again and saw that the offender had a very large I’m-proud-of-myself smile on her face.

I put her back into the crib and told her to stay put.

The sudden reality that our girls could escape their cribs at any time required immediate action on our part. My wife and I quickly discussed the safety issues and our options.

Since both girls were still awake, we went into the room and took the girls’ crib mattresses out and put them on the floor. We told them they were big girls now and that they got to sleep in big girl beds.

Well, they didn’t buy it. They bounced around, played, and turned their light on and off for about an hour.

We realized our mistake and went and put them back in their cribs (after several unsuccessful interventions). We got the escape artist to stay in her crib by tying a large bed sheet over the top of the crib on each of the four corners. It was enough of a deterrent to buy us the time we needed to resolve the issue the following day.

The next day was a holiday so we scrambled to get the girls ready for their official big girl beds. We got our boys’ box springs down from the attic, bought two new twin mattresses, and took the girls to the store to make a big deal out of buying new sheets and such for their big girl beds.

The girls were really excited for their new beds and redesigned bedroom. Unfortunately, they were so excited that sleep wasn’t a top priority.

We removed anything that could break from the room as a safety measure and even put child-proof knobs on the door handle on the inside of the room and on the handle to the closet so they wouldn’t escape or get into more trouble. We hoped that all the fanfare about getting big girl beds would help them settle into the routine.

We tucked the girls into bed after saying prayers and as soon as we said goodnight and closed the door, they turned into Twinadoes.

The girls pulled all of their clothes out of their drawers, played with toys, bounced on the beds, yelled, screamed, and had a merry old time.

We went in occasionally when we heard cries of pain (typically when one had fallen off the bed), and got them tucked back into their beds. Nevertheless, they weren’t calming down even after an hour and a half.

So I went into the room and unscrewed the light bulbs from the overhead light and took the nightlight with me.

Without any light to guide their mischievous activities, they finally fell asleep close to 10:00 PM which was about 2.5 hours later than their normal bedtime.

Tuesday night we kept the night light in the room, and did the go-to-bed routine.

As soon as Mom left the room, they bounced up and started playing again. With the overhead light bulbs missing, they only had the nightlight to see with. Nevertheless, that was enough to once again empty every dresser drawer and throw all their clothes on the floor.

There was loud playing, talking, screaming, and even banging/kicking on the door and wall. We tried to ignore all the noise but it was so loud that we feared it would wake up their sleeping brothers in the other room. Unfortunately, we found that if we went into the room it seemed to reset the timer on their play and they would just continue that much longer.

As with the night before, there were some cries of pain and I’d go into the room to soothe and put the girls back in their beds.

They must have been extra tired or perhaps they were just getting used to the routine because by 8:30 PM the room was quiet and we assumed they were on their way to Dreamland.

On the third night, we did the bedtime routine: prayers, tuck in, songs, and left the girls in their room. They played and made noise but overall were quieter than the previous nights. Around 8:15 PM one girl started crying like something was wrong. I went into the room (which was dark) and fumbled for the night light. It was missing. The non-crying girl had it in her hands, with the light bulb in one hand and the fixture in the other hand. I put the night light back together and plugged it in. I tucked the girls back into bed and left.

Ten minutes later, I heard cries again. The room was dark and once again the nightlight thief was clutching her prize. I plugged it in behind the dressers so the girls couldn’t reach it, tucked them in and said good night. They fell asleep shortly thereafter.

The girls didn’t empty their dresser drawers this evening. Hooray!

The girls skipped their naps today so they were treated to an early bedtime. Good news: all was quiet in the house by 7:10 PM. My wife peeked in on the girls at this time and they were both–amazingly–sleeping on their own beds.

On the weekend, my wife and I went out on a date each night and the babysitter reported no problems getting the girls down to bed. By the time we got home, they were asleep on their beds.

Essential Tips for Transitioning Your Twins to Big Beds

Through our experience of getting our twins to move from cribs to big beds, we realized a few key things that will help you in your home when the time comes:

Remember to be patient and consistent and eventually your twins will come around to the new normal. Good luck!

I talk more about getting your twins to sleep (and overcoming those challenges) in Chapter 5 of my book, the Dad’s Guide to Raising Twins: How to Thrive as a Father of Twins.

If you’ve already transitioned your twins out of cribs and into big beds, what worked for you? Let us know in the comments.

18 thoughts on “How to Transition Twins to Big Beds”