This week we feature mother of twins Irene Mata who shares her twin journey from infertility to healthy two-year-olds.

My husband and I had been married about a year before we started trying to conceive. After six months, we saw a fertility specialist and were diagnosed with unexplained infertility.

After three doctors, eight rounds of IVF, and one miscarriage at 19 weeks, we were pregnant again. At five weeks I had a subchorionic hematoma.

At seven weeks, ultrasound showed two sacks! (We transferred only one embryo and it split!!!) A nurse told me she heard me yell “WHAT?????” down the hall.

My husband was traveling for work at the time, so I texted him after my appointment that we had two blueberries (at 7 weeks the fetus is supposedly the size of a blueberry). He thought I was joking. He called them the ”blueberry twins.”

With our history, we did not tell anybody until 20 weeks. I think it started to sink in that we were having twins when we started buying two of everything. 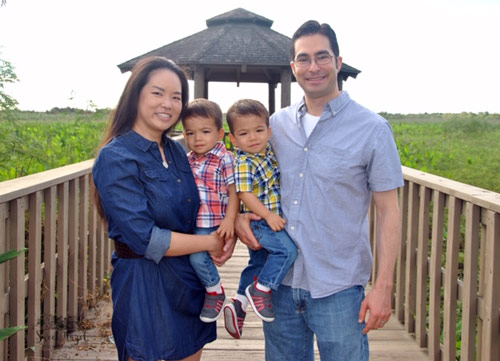 Complications Along the Way

I developed gestational diabetes and the babies had polyhydramnios. Even with a cerclage, my cervix became very thin, so I was placed on strict bedrest at 28 weeks.

At a routine appointment, the ultrasound showed reverse blood flow from the placenta for twin B, so I was immediately admitted to the hospital for monitoring and scheduled for a c-section at 7 am the next morning.

However, twin B went into distress overnight, so it turned into an emergency but had to wait for an OR so we went at 6 am.

I had always planned for a scheduled c-section with general anesthesia. I used to work as a neurosurgery physician assistant so surgery to me is not a big deal and an occupational hazard is anything in my back (epidural).

Three anesthesiologists tried to talk me out of general anesthesia, but I accepted all the risks. Twin B was intubated for twelve hours, supposedly these were compounded effects from the anesthesia.

I wanted to breastfeed, so I didn’t take any pain medication even though it’s supposedly safe. Of course, I was in pain, but it was just another sacrifice for my babies.

I was ready to be discharged two days later, but they kept me an extra day so we could be close to the boys in the NICU.

Our boys in the NICU

After getting off CPAP and removing the feeding tube, twin A came home after five weeks. Twin B’s heart rate would drop when he ate, so he didn’t come home until seven weeks.

Before the boys were born, I was afraid we wouldn’t be able to tell them apart, so I got them ID bracelets. But they’ve always looked different to me.

Obviously, they are identical, but I read that depending on how early the embryo split, even the same DNA can be expressed differently. Every family member except Mom, even Dad, has mixed them up. Grandparents still mix them up despite seeing them every week!

While the boys were still in the NICU, my husband and I agreed it was a good time for me to heal without having to lift babies. However, I was still becoming sleep-deprived since I had to pump every four hours. I even developed mastitis because I overslept one time since I was so exhausted.

I tried breastfeeding the boys while they were in the NICU, but once a day can’t compete with multiple bottles. Plus I couldn’t tell exactly how much they were actually eating. Also, bottle feeding breastmilk allowed other people to help.

My mother stayed with us for three months. My inlaws came for a few hours most days. My husband worked from home for a while. But we were all still exhausted!

We did not utilize an efficient enough rotation. My husband suggested keeping the boys’ eating schedule staggered up to 1-2 hours apart in case only one adult was available, which was never the case! So there was no downtime.

By then I was desperate so I asked a friend who had twins and found Facebook groups for moms of multiples for advice. For example, the Twin Z Pillow would’ve been useful in feeding them together. 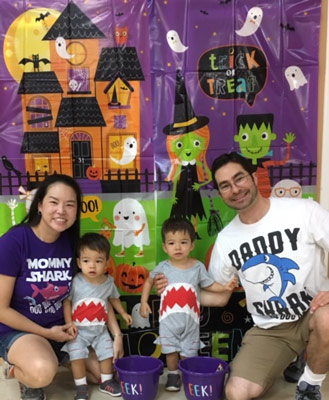 Taking Care of the Twins

My husband took his two-week paternity leave when my mother left. Then I took care of the boys by myself. It was intimidating at first, but we all survived. I’m too much of a control freak to allow anybody else to take care of them. We had decided I would not return to work for a few years anyway.

The boys slept in bassinets in the living room. It was summer when they were three months old so there was way too much light. Witching hour was brutal. The boys had to wear helmets for plagiocephaly.

When we started sleep training, that made them sweat even more. We moved the bassinets into our bedroom with blackout curtains and white noise. When they slept through the night at seven months, we moved them to their cribs in their room. Ever since they have slept 11-12 hours every night.

The boys are 20 months now. They are good eaters. They nap 12-3 pm, so we usually go to the library for storytime or the park in the morning and the grocery store in the afternoon. Most days there is minimal crying and whining, but other days I’m screaming “no” a million times.

They love flipping through books and being read to. I’ve tried to introduce more fine motor activities, but they’re not interested yet.

Dad’s commute during the week allows him to see the boys for only 10-20 minutes before bedtime. They sleep from 7:30 pm – 7:30 am, so we do have the evening to ourselves.

Twice my sister-in-law has come over to “watch” the boys after they went to bed so my husband and I could go out. The boys were 19 months old when they spent the night at my inlaws’ house for the first time. It’s hard for me to trust other people to look after my boys. They started Mother’s Day Out at 18mo for two days a week and I watch the live feed all day. We do not have any travel plans any time soon and I can’t see our leaving them for days at a time either.

I got a tandem breastfeeding pillow I never used. I never even held them together until they were at least 9mo! They didn’t like the single baby carrier. We didn’t know twin carriers existed! We discovered lots of twin equipment after the fact, like a double bottle warmer!

Keeping it all Together

I don’t know what I love most about having twins yet, but the thing I dislike the most is not being able to give each baby enough individual attention. They have been forced to share everything, especially mom. We don’t have any singletons, but I think older siblings can understand better why they have to wait a little bit.

My husband and I have been married for nine years. He has always been strong and supportive during our struggle to conceive. We agree on our parenting style, which is in the middle of the spectrum of how we grew up—his parents gave him a carefree, wonderful childhood whereas I had a strict, Asian upbringing. We try to be stern but explanatory, fun but safe.

Right when I think it’s getting easier, something else surfaces. Once we got down bottles, solids, and naps, separation anxiety and teething rear their heads. Then they start walking…in different directions!

I still can’t believe we have twins. Every day I look at them and just think, wow, we have these two amazing little humans who are healthy and happy (most of the time), and we’re responsible for their learning and well-being.