A mother of twins writes and asks, “I have two-and-a-half-year-old twin boys and the oldest gets extremely jealous anytime I show some affection to the younger twin. Simply picking up the younger twin and putting him on my lap sends the other into a tantrum that doesn’t end until their positions are reversed. Have you experienced any of these same symptoms? I don’t want to have them have any animosity toward each other as they get older. I’d appreciate any tips you can share on dealing with jealousy between twins.” 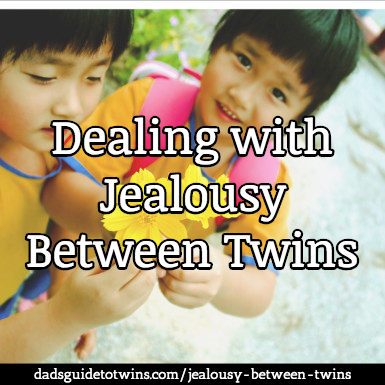 Jealousy manifests itself differently based on the age of your twins. In this case, the parent has two-and-a-half-year-old twins. At that age, they are able to understand and communicate with you, and so that opens up some new options as far as parenting and behavior correction. It’s time to encourage the behavior you want to see.

Whenever possible and whenever we remember, we try to focus on the good behavior that is happening and give positive praise and attention for that behavior.

Maybe instead of giving your boys equal treatment, you can pour out your attention and praise when one of your twins is doing what you would like to see done. If, for example, you’re able to play with or put your youngest twin on your lap and the other twin is cool with that for even a few seconds, give him praise and reinforce that behavior so it continues down the track of what you would like to see.

At two-and-a-half they should be able to understand the concept of taking turns.

You can demonstrate that and do it in other situations; while playing with toys, or with food, or time on your lap, or attention that you’re giving them.

If you tell them that they’re going to take turns and then you follow through and have them do so, it helps reinforce the fact that they can build some of that patience and self-discipline to enable them to wait for their turn.

While building the habit of taking turns at this age, the turns may have to be very short due to a toddler’s short attention span.

Another option to consider is the distraction technique which we’ve talked about before. If one of your twins is upset that you’re giving attention to the other, you can just distract the upset twin with another toy, a book, or an activity which they can do while you give the attention you need to their sibling.

Use Everyone at Home

If you’re lucky enough to have both parents home at the time that this happens, it’s easier to divide and conquer. Each parent can then take one of the twins and give them individual attention.

I hope some of these tips will help you as you try to navigate the jealousy between twins. Part of parenting through jealous tantrums is preventing them from happening in the first place through establishing good habits and good behaviors. We often find that positive reinforcement of the behavior that we would like to see leads to success with that in our home.

This topic was originally addressed on the Dad’s Guide to Twins Podcast Episode 106: Twin Jealousy, Child Care Costs, What to Love About Having Twins.

Original photo by jiunn kang too