How did you know that you would be having twins?

When we found out that we were expecting twins, we already had two little toddler boys. To begin, my wife had taken a positive pregnancy test at home.

Since we had gone to the doctor with the two previous pregnancies, I knew the routine (she gets a little lab work to determine that, yes, she’s pregnant).

Because we had two very active toddlers at the time, I said, “hey, let me stay home with the boys. We’ll drop you off at the doctor’s office, and we’ll come pick you up when you’re done.”

So my wife went to that visit by herself. She the doctor confirmed that yes, she was pregnant.

And then they hooked her up to the ultrasound machine.

At that point, the doctor identified that there were two and not just one.

When my wife was done with a doctor visit, she called me on the phone to say she was ready for pickup.

On the call, she said that she had an ultrasound.

I told her that was great. And then I paused as I realized what was happening. “Did you say heartbeats? More than one?” 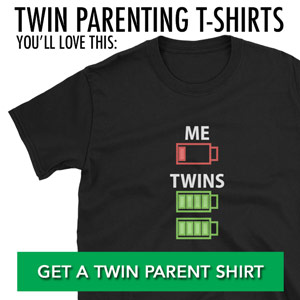 My wife confirmed over the phone to my panic self that yes, we would be having twins.

I raced over to pick her up the doctor and the adventure hasn’t stopped since.

The ultrasound is the primary way that people find out that they are having twins.

An ultrasound is a very standard thing during the pregnancy to determine how things are progressing with the baby.

The doctors want to know that everything’s going well; babies are healthy, mom is healthy, and there are no complications.

During that scan is typically when most parents of twins find out that they are having twins.

So that may be the case with you as well. As I mentioned before, this is exactly what happened for us during that first doctor’s visit after we found out that we were pregnant, so very early in the pregnancy.

If the ultrasound doesn’t identify twins for you, it may be bloodwork that’s done during the pregnancy.

This can give clues to what mom is carrying.

Additionally, a simple heartbeat monitor may pick up multiple heartbeats that would likely send mom to an ultrasound for confirmation.

Finding Out At Birth is Unlikely

Of course, every parent of twins sees that they are having twins at the time of delivery.

However, waiting until birth to find out that you’re having twins is extremely unlikely.

If you have normal prenatal care for mother and the baby during the pregnancy, you’ll know before birth.

News of Twins vs Reality of Twins

While we found out at the very beginning of my wife’s pregnancy that we would be having twins, for me, the dad, it didn’t really set in until much later.

It started to get “real” for me when: Did you already find out that you’re having twins go and leave a comment below with how you discovered that you would be having twins.