My kids and I stumbled on a video showing the recent runaway llamas in Arizona.

Apparently, a pair of llamas escaped and ran rampant through the city.

It was a pair of youngsters escaping and running away (and in different directions).

Yes, your twins are like this pair of llamas.

Watch a bit of this video and you’ll see a lot of similarities between the llamas and your twins:

So just why are your twins like these llamas?

1. You think you’ve got them cornered and they dart the other way
2. They move faster than you
3. They go where they aren’t suppose to go
4. They ignore calls to stop
5. They run out in to the street with out looking both ways
6. They don’t stay on the sidewalk
7. They can move together as one or do their own thing
8. They get scared by strangers
9. They eventually split and run in opposite directions. (This typically happens when you are alone with them.)
10. Eventually you realize you just need to keep the twins on a leash (since you can’t really lasso your kids).

Yes, these llamas might as well be your twins.

Watching this video made me think of the frequent question we get, “do twins run in your family?”

Just like these llamas, yes, my twins run a lot!

My response to that question is always, “they do now!” which you can get immortalized in this shirt: 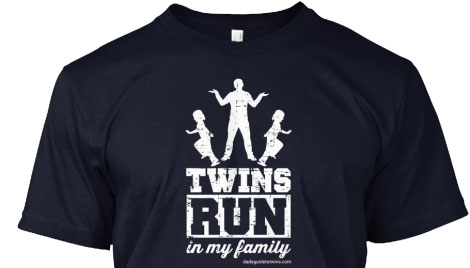 What other ways do you think your twins are like these runaway llamas? Leave a comment and let us know.