Can you make your own baby food for twins? 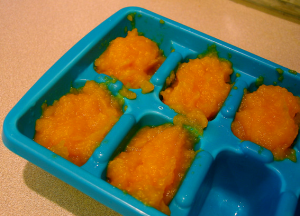 Yes, You Can Make Your Own Baby Food

You may have heard that you can actually make your own baby food at your house; you don’t have to buy it in the little jars. And so when your kids start to move away from breast milk or formula milk and they’re ready to start more foods, making your own baby food is a very viable option. Around six months old is when your twins are going to start moving towards solid foods.

Now, my wife and I made our own baby food. Now, when I say “we,” I really mean my wife, made baby food for our twins. But the process could not be easier.

Steps to Make Your Own Baby Food

If you have a small food processor or a blender and you’ve got ice-cube trays, then you pretty much have all the equipment that you need to make your own baby food. You’ll put the vegetables, the sweet potatoes, the squash, whatever the food is that you’re trying to make baby food out of into the food processor.

Basically, you’re going to just puree that, and then you put little servings into ice-cube trays to freeze. And then, once you freeze those ice-cube trays, then you pop them into a little Ziploc baggie that you can then store in the freezer. And you can pull them out whenever you need to give your kids some food. You just warm them up and away you go.

Resources on Making Your Own Baby Food

My wife used a great book called Super Baby Food. This book has a lot of recipes of baby foods that you can make for your twins, and we had used a lot of these great recipes. Our girls were very receptive to homemade baby food.

Advantages of Making Your Own Baby Food for Your Twins

When Not To Make Your Twins’ Baby Food

Now, you probably do not want to make your own baby food if you don’t like cooking. So if you don’t like cooking, you may want to cross it off the list, even though it’s pretty easy. You’re going to bake squash in the oven and then puree it and put it in the freezer, in the ice-cube trays. It’s pretty straightforward, but if you’re averse to the kitchen, then you might want to avoid making your own baby food.

So making your own baby food is a viable option for twins. Because you’re making the food in bulk–you’re going to cook up a whole squash or whole sweet potato or several sweet potatoes–making for twins versus singletons isn’t really an issue because you’re going to make a big batch of food, put it in the freezer, and then draw on it as you need it.

Our girls did great with making our own food, and they really are great eaters, even to this day, several years later. We really attribute it to them getting great food, a really diverse collection of food early on, from making our own baby food.

This question was originally addressed on the Dad’s Guide to Twins Podcast episode 20.