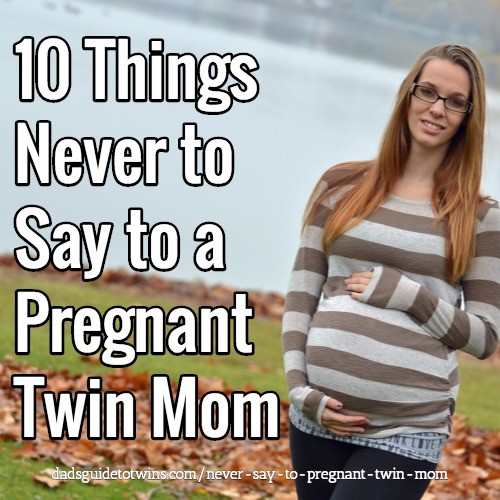 This post is from fellow twin parent Nina Garcia

I get it. Twins are an anomaly. By now, we twin parents have grown used to the idea of twins that it doesn’t even phase us. But to others not in the world of twins, carrying and raising two babies seems beyond belief.

When you’re a pregnant twin mom, you’re fielding comments galore. Below are 10 things I’ve heard from others that made me cringe or throw a fake smile. And at best, laugh it off hoping they didn’t mean anything bad by it.

10 things never to say to a pregnant twin mom:

Before I had twins, I saw another woman pregnant with twins. And yes, she was big. As in, I couldn’t imagine how much bigger she could get. Moms of multiples push the limits with how far our bellies can grow.

But please don’t tell us that. Many twin moms are already past the point of trying to look good. We don’t need to hear how big we look to the outside world.

What people mean to ask is whether the twins were conceived through IVF or not. Again, still not an appropriate question. How we conceive is personal and nobody’s business.

I don’t know what people are thinking when they ask this question. I’m guessing they don’t know about twins and assume it’s something you can plan.

They carried only one baby at a time, not two. As any twin mom knows, a twin pregnancy is crazy different from a singleton one. And as difficult as it is to have two babies close in age, nothing beats having two babies the same age.

I won’t lie. Having twins can put a huge dent on your budget. While you don’t always have to buy two of everything, the little costs add up. And let’s not forget big-ticket items like hospital bills and preschool costs. They don’t count them as one person, as much as we wish they would sometimes.

But, just like you shouldn’t tell us we’re so big, don’t tell us our twins are going to cost so much. We know.

But others may not be quite so done. They might want to expand their family even more. Don’t assume that having twins means we’re done with kids.

Some moms are okay with others feeling their belly, especially from friends and family. But most twin moms would rather not have someone rub their bellies. Nothing magical happens when you rub a twin belly.

If someone tells you they’re going to have twins, please don’t look like you just heard the worst news ever. It doesn’t make us feel good at all. We’re the ones overwhelmed with emotions, including dread. We need you to be supportive, not assume we’re going to have the hardest time.

#9: You’ll probably have a C-section.

According to the CDC, 75% of twin moms need a C-section to deliver their babies. Again, just as we know twins will cost a lot and will make us big, don’t remind us of something we already know and probably feel scared or anxious about.

Confession: I wasn’t happy to hear I was having twins. I cried for a week when I first found out. I felt so anxious, so unprepared about a topic I knew so little of. I didn’t want to be an anomaly—I wanted to be a regular mom with nothing unusual to report.

Three years later, and I’m so, so glad I have twins. It’s hard work, especially in the beginning, but that only made me more confident as a parent. My twins are amazing brothers to one another and to their older one as well. And I have an instant bond with other twin moms and dads like we’re all in on a secret twin club.

Nothing others say will deter us from wishing the best for our twin pregnancies or how we feel about our twins. But these comments, even those well-meaning, should simply remain unsaid.

Tell me in the comments: Did anyone say these comments to you? What were some of the worst comments you heard?

About the Author
Nina Garcia is a mom to three boys: a six-year-old and three-year-old twins. She blogs about parenting at Sleeping Should Be Easy, where she writes everything she’s learning about being a mom and raising twins. Get her FREE 5-day email course, Bringing Home Twins, and learn how to survive the early weeks with newborn twins.