David and his wife recently found out that they’re expecting twins. And of course, that’s a huge surprise. They’re in the initial state, like most of us are as parents of twins, of complete shock and being scared about what this actually means for their family. 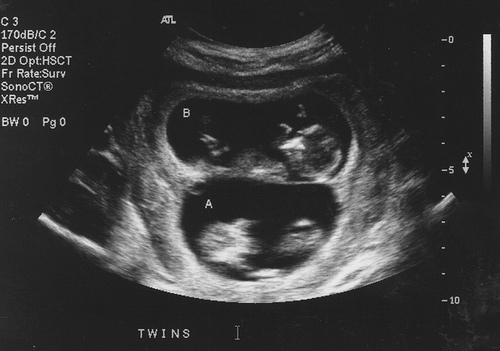 He’s feeling like things are out of his control. They’re expecting twins, wasn’t really in their control, it’s a surprise, and so he’s grasping at how he can gain control of things in this situation.

And so one of the things that he and his wife decided to do was keep the gender a surprise for the twins. And so they went to a follow-up ultrasound, and before they could say anything, the technician blurted out, “Oh, are you excited to see twin boys?”

David, one thing for you to know, and for all of us expecting twins, is that the emotions that you’re describing and that you’re feeling are completely normal. As you mentioned, David, you are grasping for something that you can control, and so far everything about twins has been out of your control, from finding out you had them to accidentally finding out what the genders were.

So in the early weeks, after finding out that we were having twins, I was completely shocked and scared, just like you’re describing. I turned those emotions around by focusing on what I could actually control, and that was mostly making preparations for our twins’ arrival, making the preparations in our home and for our family, things that I could make lists, I could control and move forward.

Now, there’s a silver lining to knowing the genders of the twins. David, now you can prepare boy-specific things.

My wife and I found out the gender: we found out we were having girls. I thought it was great that I could picture my girls in the future, in my mind, what life would be like with them after they were born. I could envision them playing in the backyard, dressed up in their ballerina outfits. It was easier for me to visualize what it would be like to be a father of twins because I knew what the genders would be.

Now, David, the pattern that you’re seeing thus far in your pregnancy is also foreshadowing and getting you ready for the surprises that you’ll get throughout the twin pregnancy after your twins are born or even during the pregnancy.

There are so many things outside of your control that you need to focus on what you can control and take each step and surprise as they come. You’re absolutely entitled to be mad, angry, sad, and everything in between. This is completely natural. As long as every twist and turn still has your twins on track to arrive healthy and safe, you have reason to rejoice.

All right, David, I wish you the very best, you and your wife, as you prepare for your twins’ arrival.

This question was originally addressed on the Dad’s Guide to Twins Podcast episode 20.