Okay, so our question today comes from a mom who’s got 6-year-old twins. And she says, “There’s a lot of arguing between them when they want to talk to me about something that happened at school. Or just in general. It almost always ends up with one of them crying because the other one talked first and now they forgot what they wanted to say. Or when they interrupt one another they are also crying. We’re trying to teach them not to interrupt. But when they get upset because the other one talks too long they forget what they wanted to say. Do you have any suggestions on how we can handle this situation?” 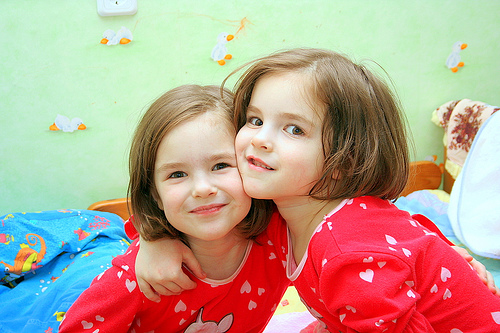 So when I read this email I thought you were describing my family and my house, because I’ve got six-year-old girls and this sounds exactly like our house. The talking over each other and being frustrated and crying because I forgot what I was going to say because so-and-so is talking. That’s like the story of our lives, it seems. So I had to do a sanity check to make sure you weren’t actually talking about my family because it’s a common situation that you’re going to have when your twins are talking and they’re going to want to talk over each other. And they both want attention at the same time.

So we have found that reinforcing good behavior throughout the day has helped here. So if you’re giving positive reinforcing attention to your twins when they’re having good behavior. So, for example, if they are taking turns or they are talking one at a time, reinforce that behavior. And remind them that yes, that’s how we talk to each other in the family and that you are grateful that they are taking turns in talking.

We’ve also had to reinforce the rule that only one person can talk at a time. This kind of means that you have to play an arbitrator of a discussion to make sure that only person talks at a time. You may have to cut off one of the other twins or other siblings if they start to interrupt their brother or their sister. Definitely make sure that you are giving each child attention and the time to speak his or her mind.

Going Around the Table

Perhaps they are getting frustrated because they are not getting enough attention or time to talk with you or with the family. This is really a challenge, for instance, at dinnertime when everybody’s around the table, everybody’s excited to talk about their day and they all want to talk at the same time. We’ve had some headway here by going around the table, taking turns describing your day, the things that you want to talk about and then moving on to the next person.

Our kids have also taken to raising their hands at the dinner table to make sure that they can inject a question or a comment, which doesn’t always work. But it is a good pattern if you want to try that. It often feels like you are the referee of a speech contest. And that’s true. You kind of have to make sure that you’re given mental priority, mentally remembering the priority of who’s going to talk and who’s going to talk next.

Our kids have learned to take better turns and wait for their siblings without too much of a fuss. But it does take constant reinforcement of the family rules that you can’t interrupt each other, you have to take turns talking to each other, and that you want to hear from each and every person in the family. So good luck with your twins as you have these challenges as well.

1 thought on “Preventing your Twins From Constantly Interrupting Each Other”