I read a very interesting article over at Psychology Today that talks about the psychology of parenting twins by Dr. Kristi Pikiewicz. As we’ve talked about a lot, it is different being a parent of twins and raising twins. There is a psychological burden of raising twins. All parties involved: mom, babies, and dad can feel guilty that they’re not giving enough attention and not receiving enough attention, or that they’re stealing attention from each other. For example, a twin distracts mom from the other twin, and mom feels guilty that she can’t tend adequately to both twins at the same time. 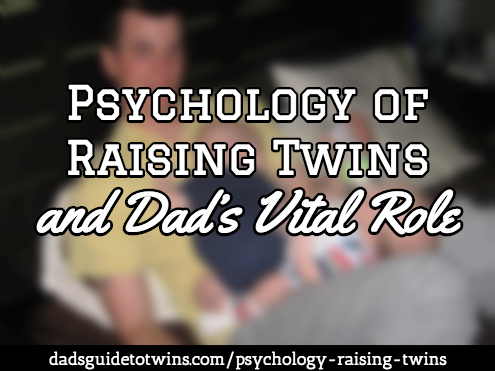 Dr. Pikiewicz states, “When the father is present, the mother can relax her psychological effort of having to pay attention to two individual babies and to their twinship. Now each parent can pay sole attention to one baby without having to worry about the other baby’s needs. During these times, the baby can come to know herself outside her relationship with her twin. This will help her define the boundaries of self-otherness and also relieves her from the guilt of being an interruption to her other twin.”

Yes, this is a thick and academic in wording. However, there are some key concepts in here that I want to draw your attention to.

First of all, it’s that you, dad, play a vital role in the psychological health of your twins and your wife. We’ve talked before about helping mother care for the twins: helping feed them, helping care for them, helping during the night. We’ve talked about the physical relief that it is to your wife so that she can rest. But the key here, as we’ve read, is that you’re not only relieving her physically but also psychologically and emotionally. You’re helping reduce that guilt, because she can pay individual attention to one of the twins while you give individual attention to the other. That’s a huge win and a huge advantage, and highlights the importance that you can play in helping with the twins in your home.

Another thing that was mentioned in the article is that you are helping your twin “know herself outside of her relationship with her twin.” That’s pretty interesting, because from the moment your twins are aware of each other in the womb, they’re always with each other, and that has a great psychological impact on their relationship to each other and their perspective of their own self. By separating the twins to help take care of them, like during feeding time, you give each twin his or her opportunity to build up their own individuality.

That’s pretty cool. That’s something that you can do, dad, as you are involved with your twins in the home. If you leave everything to mom, as this article has mentioned, she’s going to feel a lot of guilt having to split her attention between both twins. If you can be involved with the twins as much as possible, when you’re home from work and during the night when it’s hard to take care of them, it’s going to be a big benefit to both your wife and your twins.

This topic was originally addressed on the Dad’s Guide to Twins Podcast Episode 81: Dogs and Twins, Psychology of Raising Twins, Different Due Dates.