One question I received recently was, “Does the shock of twins ever go away during the twin pregnancy?”

The answer is yes, and no. 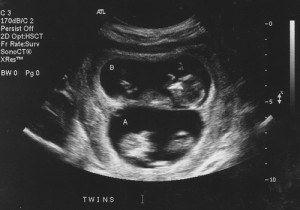 I found out as a father that my freak outs were kind of cyclical.

I didn’t believe it at first. I was in complete shock. But then I would say, “Okay, we’re having twins.” I would kind of accept it, but then I would go back again to disbelief.

When we’d go to see an ultrasound, the reality would set back in that, “Yes, we’re having twins,” but I’d still be kind of shocked.

Now from the outside looking in, a twin pregnancy seemed the same to me as our previous singletons up until the last trimester. So everything was kind of surreal and hard to believe.

My advice for helping to overcome the shock of twins during twin pregnancy is to help that reality set in.

Go with your wife to the doctor’s office so you can hear the heartbeats, and you can see the ultrasounds of your twins wiggling around in there together. That will help set in the reality that this is actually happening.

Preparing for the Reality of Twins

A lot of things are going to be out of your control, and that’s just fine. Take those surprises that come along when they pop up and deal with them the best that you can.

But you can do a lot of things to prepare your home and your family for your twins’ arrival.

Take advantage of funneling your emotions, your anxiety, and your shock into doing something that you can control. You can’t change the fact that you’re expecting twins, but you can help to get ready.

Does the shock of twins ever go away during twin pregnancy? No, not really, and when they’re born it’s a whole new shock.

The complete awe and amazement that two little babies were in there the whole time, and here they are and you’re holding them in your arms. That’s a great feeling.

This question was originally addressed on the Dad’s Guide to Twins Podcast Episode 45: Flying Alone with Twins, Dad’s Priorities, Shock of Twins.