This question comes to us from Matt. He asks, “Any tips to get my twins to stop whining all the time? It’s driving us crazy.” Okay, Matt. I understand this completely. It is unbearable as a parent to have to deal with incessant whining from your children. 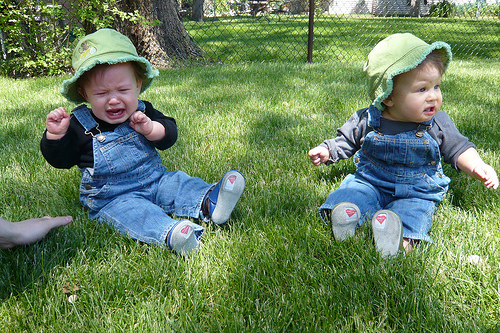 And of course, when you have twins and they both start to do it at the same time, it really compounds and make things worse. I’m sorry that you’re having to suffer with whining twins. We struggle with this too in our house. And I think it’s something that we’re going to probably have to deal with for a long time to come.

I’m thinking the whining we get from our girls right now when they’re young is kind of foreshadowing what they’re going to do when they’re teenagers later. We’ll know when we cross that road later.

We found that we had the most success with our twins by pointing out when they start to whine. We say, “You don’t get what you want when you whine and you cry.” And this has reinforced our expectations that we set with them.

As long as we don’t give in to their whining demands, it seems to work.

So as long as we say, “Hey, you’re not going to get what you want when you whine.” And we don’t actually get them what they want when they whine.

They start to settle down and then they understand that’s the case. Oftentimes, they still need to be reminded of that, but it seems to work for us. So it’s something you might want to try.

In addition, I always like to shift my attention from whoever is whining to other twin or sibling and verbally praise something good that they are doing. And so I ignore the bad behavior that I don’t want to continue. And I pile on the praise on the good behavior that I do want to reinforce and I do want to continue. So the positive peer pressure starts to kick in, and it’s worked very well for us, because the whining twin really wants that attention as well.

One thing you have to remember is that you need to be consistent by reinforcing your expectations with whining, because the kids will try to whine if they know you will eventually cave in to the whining and meet their demands.

It’s imperative that you be consistent and don’t give in to the whines. Otherwise, it’s just going to reinforce that whining does work. And they just have to do it maybe longer or louder than they did before.

So Matt, hopefully these tips have been helpful. And good luck.

This question was originally addressed on the Dad’s Guide to Twins Podcast Episode 47: Stimulating Twins During Pregnancy, Stopping Whining, Finding a Pediatrician.