As your twins get older, they will start to get into trouble and be more mischievous. Yes, it is true. They won’t be little angel babies forever.

When any child does something wrong, there is usually a consequence. Something is broken, lost, or left undone. A common practice is that the child will blame a sibling. You likely saw this growing up in your family or with your other children before twins.

However, with twins, things get really interesting. Now, each child has a scapegoat always around. Someone who is the same size, similar appearance, and easy to blame. 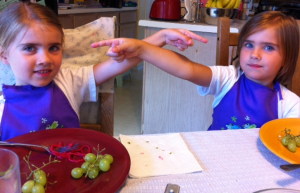 Your twins will blame each other. They will point fingers. They will deny any involvement. They will even implicate the other in whatever shenanigan is causing you to be angry.

As you observe your twins, you’ll start to notice when one is lying or not. Call it parental intuition or just the innocence of youth making it painfully obvious something isn’t the truth.

When you jump to the conclusion of which twin is the guilty party, look for the reaction of both twins. You’ll start to see different reactions meaning “I’ve been falsely accused” or “OK, I’m guilty.”

Perhaps who is at fault doesn’t really matter. Forgive and forget and move on. No need to reinforce bad behavior by making a big deal about it.

When in doubt, make your twins take turns cleaning up the mess that one of them made. This will quickly start to help them take responsibility for their actions.

These habits will be easy to spot. You’ll catch a twin in the act of committing the crime. Or the scene will have tell-tale evidence of who was involved.

As a parent, you’ll be able to know who did what even though you’ve got both twins blaming each other.

Have patience and a discerning eye and you’ll be able to survive the twin blame game.

1 thought on “How to Survive the Twin Blame Game”