Raising twins is tougher than raising a single child or even a few kids. As parents, you’ve got a lot of challenges to deal with, from the feeding and nursing to the sleepless nights. The first couple of years will be remarkably hectic, but each passing year brings new challenges.

While there is an inherent connection between twins, sometimes their similarities can turn them against each other. 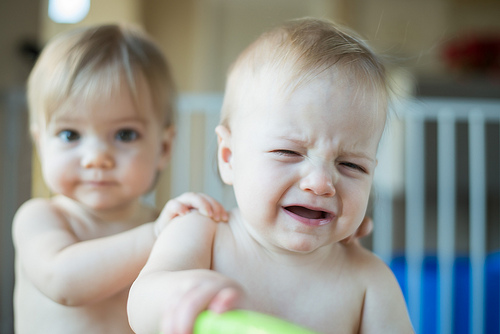 Competitive twins can be quite a handful. And sometimes, they’re so completely the same that they tend to get frustrated and will want to get away from each other. How do you deal with competing and feuding twins? Try these practical tips for twins who can’t get along.

Parenting Twins as Individuals Rather than as ‘Twins.’

Fraternal or identical, twins crave individuality — maybe not all of the time, but most of the time. That’s an important thing to remember about your twins, that they’re unique in their own right. So help your twins come into their own personalities by having them dressed differently, by getting them separate presents on their birthday, and by resisting the urge to refer to them as “the twins.”

Devote One-on-One Interaction to Each Twin.

Twins don’t always get one-on-one interaction with parents. Try to create opportunities for bonding with each twin and give them their own private time with you. Some parents try to read separate bedtime stories to twins. Some parents take each twin on separate rides when at the carnival or state fair. Your one-on-one time with one twin could even be as simple as taking a walk together.

These individual interactions will help your twins develop relationships with other people as they grow older. You should also use this private time to let each one know that you love them equally. And while you’re at it, teach the twins to appreciate each other in any way you can.

Sometimes, twins need their personal space. If their arguments start to increase, it may be time to put them in separate bedrooms. If you have other kids, you could bunk each twin with the youngest or the middle child.

You might never avoid the arguments when the twins are in the same space. But remember that these can always be settled in a fair and calm discussion. By mediating between the twins during fights, you teach them to resolve issues in a more mature manner.