As you approach the delivery date of your twins, you might see an ultrasound and wonder, “What does it mean when your twins are breech?” 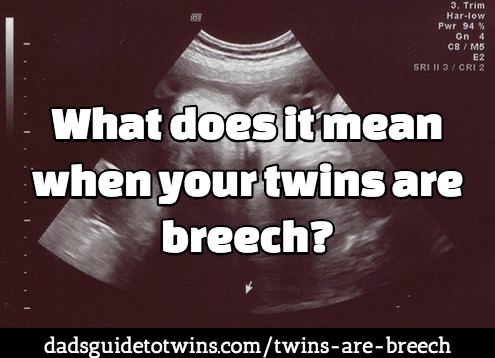 Breech in any pregnancy means that the baby is positioned with their butt or feet closer to the exit of the vaginal canal instead of their head.

Normally with pregnancies, you want the baby to have its head come out first first during a vaginal delivery.

With twins, keep in mind that when we talk about breech babies, one or both twins may be a breech. It’s only talking about the position of your baby, not the health of your babies. It’s only going to impact how they will be born.

Ideally, both babies of a twin pregnancy will be head first. That gives you the option to have a more natural vaginal delivery of your twins. Many doctors won’t even try a vaginal birth, if one or both of the twins is breech.

Your babies can be in many different positions while they are in the uterus. They can be breech, they can be bottom down, they could be transverse where they’re leaning kind of sideways, or they could be head down. You’ll know as you approach delivery of your twins how they’re positioned because you’ll be able to see that on the frequent ultrasounds that you are receiving. Make sure you talk with your doctor about the options that this presents for you.

What Can You Do?

There are some methods of moving babies while they’re in utero to try to get them head down. Those methods are varied, and there may be some complications with a multiple pregnancy like a twin pregnancy as opposed to a singleton pregnancy.

Talk to your physician about options for getting babies in the position that you would like, and if that’s not possible, what that means for the delivery. Does it mean a definite c-section or is a vaginal birth is still an option? It will be based on what your doctor is willing to do.

What to Expect at Birth

When your babies are breech, it’s not the end of the world. They could still be born very healthy and happy. They just may not be born the way that you are hoping, say if you are hoping for a vaginal birth, you may instead have to get a c-section for your babies.

With our twin girls, one of them was breech, and so we were already planning a cesarean section for them. They did come out bottom first, and they turned out just fine.

This topic was originally addressed on the Dad’s Guide to Twins Podcast Episode 102: New vs. Used Baby Gear, Parent Time with One Twin, Breech Twins – Podcast 102.

2 thoughts on “What does it mean when your twins are breech?”