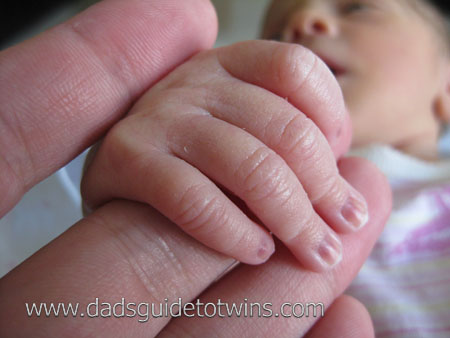 When our twins were newborns, I sometimes had trouble telling my twin girls apart. Sure, they are identical, so you can’t blame me, but I’ve come to realize an important thing:

Twins may look alike but they are distinct and unique individuals.

This becomes more apparent the older your twins get. As little twin babies, they often look the same, sound the same, and even move the same.

Twins naturally have a twin bond which ties them together throughout their lives. You don’t have to impose that on them by treating the twins as a combined entity.

I have identical twin girls and after a few months, when they started to be interactive, each started to take on her own personality. In fact, I could often tell them apart, not because of their looks, but because of their mannerisms, behaviors, and even the way they smiled at me.

One way to respect your twins is to refer to them by their names and not in general terms like “I’ll get the twins” or “the twins are sleeping.”

Yes, your twins are twins, but they are also individual boys or girls. Look for the differences instead of focusing on the similarities and you’ll see just how different they are.

14 thoughts on “Twins are Individuals”