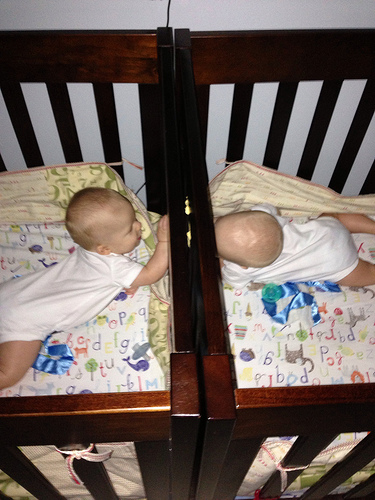 Safety-wise, it is recommended that inside your crib, you don’t put extra bedding or blankets, etc. This will help reduce the risk your twins may die of SIDS, sudden infant death syndrome. You definitely don’t want the twins to get entangled or suffocate. If your twin cribs are side-by-side, especially if they’re touching, make sure that you don’t have any of this extra material in the crib with the twin, because one twin’s blanket may get pushed through to the other twin’s crib and cause trouble.

How Close Together to Have Twin Cribs

At the beginning with our twins, our girls shared a crib, but ultimately ended up moving into two cribs in the same bedroom. Recent research has indicated that you should have your twins, one in each crib, from the beginning. We had our girls’ cribs side-by-side, but we did have a walkway between them. This way, my wife or I could stand between the two cribs and reach out and touch both babies. This came in very handy when both of the twins needed some reassurance; they needed some soothing at the same time.

The added benefit was that our girls could also see each other and hear each other more easily, and they did seem to be comforted by that. As our twins got older and were more able to distract each other, we ended up moving the cribs to opposite ends of the bedroom. While they did share the same bedroom, their cribs were far from each other. This helped minimize their interactions with each other when it came time for naps and bedtime, especially as they tended to want to play, talk to each other, and distract each other from the ultimate purpose, which was to go to sleep.

Regardless of the size of room that you have for your twins, especially if they’re sharing a room, you should be able to put your cribs close enough for your own purposes, if you need to soothe both twins, but maybe far enough from each other so that they don’t reach out and distract each other when they should be sleeping.

2 thoughts on “Is it Safe to Have Your Twins’ Cribs Touching?”