Even though we have identical twins, they have very distinct food preferences. Your twins will likely have differences in their tastes as well. 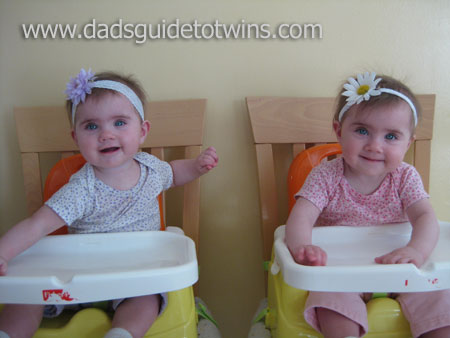 You can’t force both twins to be the same. They are individuals and will readily share that uniqueness with you all the time. This means that they won’t necessarily eat the same thing at every meal. It is also fun to watch which food each of your twins will reach for to eat first.

Keep offering new foods to your twins. It can take between ten and fifteen attempts before a child will consistently eat a food. So don’t give up too early!

Try variations of the same food (for example: steamed vs. baked vs. grilled) or include the new food mixed with older favorites.

Even from an early age, treat your twins with respect as individuals. Describe what you are doing and what they’ll be eating.

Once your twins are able to communicate, you can ask them before serving them foods. They will tell you what they want (or don’t). We used tips from the Baby Signs book to help our girls communicate their preferences with us even before they could talk.

We typically offer all the foods that are with the meal and then will ask them if they want more of something. If you rely only on asking them, they will likely stick to their favorite foods and never try anything new.

Each of your twins will watch the other for cues on what is acceptable behavior. When one twin devours a certain food and clearly enjoys it, the other will likely be persuaded to as least try the food.

Likewise, when one twin flatly rejects dinner, the other will likely follow suit without even trying.

As our twins reached toddler age and we could reason with them we’d highlight and praise the positive behaviors we’d like to see so that the other twin would desire similar praise (or dessert).

Like twins’ personalities switching, their food preferences will change too. Don’t get too comfortable with one twin eating a certain way because it will likely change sooner rather than later.