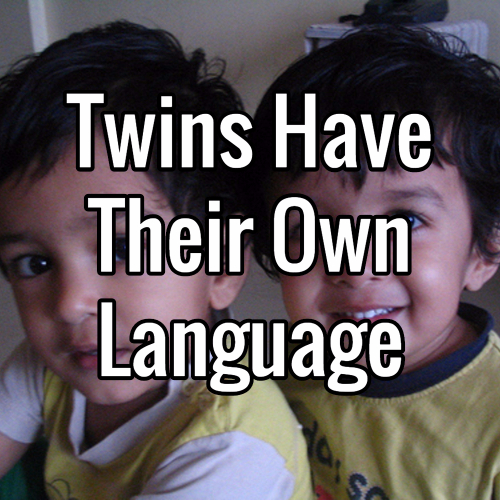 As soon as your twins can make a sound, they will start to “talk” to each other.

I started to notice this when our girls were a few months old. Our twins shared a crib for several months before we separated them into their own cribs.

Once we separated them, we started to notice an interesting phenomenon.

Since they were in separate cribs but slept in the same room, they could hear each other squawk and make other baby sounds. To help themselves locate each other, one girl would squawk and the other would answer with her own squawk.

This pattern of twin-to-twin communication continued through to their toddler years.

I’d frequently catch the girls chatting to each other with some recognizable words mingled with gibberish. Each would respond to the other in turn and thus they carried on a conversation whose meaning was unknown to the rest of the family.

Is it really a twin language?

Some research indicates that perhaps twins don’t actually have their own language but rather are just at the same level of their speech development.

Since speech is one of the common developmental delays in twins, you should watch their behavior closely. You don’t want them slowing down their speech progression because they can “talk” just fine to their twin.

Regardless of if your twins form their own language or not, they will have unique experiences together that will only be understood between the two of them. Look for these and you’ll be surprised what you find.

As your twins get older, the way they communicate with each other will mature but they will likely still have some shortcuts. This may be as simple as not having to say as much to get a point across. Or your twins may constantly cut each other off because they know (or think they know) what the other will say or do.

Look for how your twins are communicating with each other. You’ll find patterns and behaviors that highlight this phenomena.

What secret codes or sounds are they making that you can’t quite decipher but that they seem to understand just fine?