For our girls, this happened when they were about five years old. 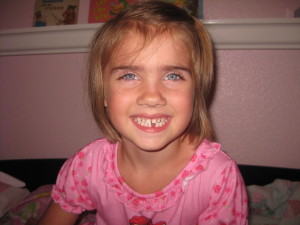 Our twin girls had seen this process with their older brothers so they were familiar with wiggly teeth and the tooth fairy.

As you’ll likely see, your twins look for each other’s reactions when determining what they will do and how they will respond to certain situations.

Both our girls were excited about the tooth fairy but were cautious about getting their loose tooth pulled out.

Even though your babies were born at almost the same time, and even if they are identical twins, they won’t lose their first tooth at the same time.

In our case, our oldest daughter had the first loose tooth. The tooth got loose enough to almost fall out but wasn’t quite there yet. We, as parents, had to help it along.

As with our other kids, we’ll wrap some dental floss around the tooth, tie a knot, and yank it out. If the tooth is ready, it comes out pretty easily with this process.

Our first daughter went through this process reluctantly but excited for the tooth fairy.

Our second daughter watched and wanted nothing to do with the process – even for her tooth which was getting ready to fall out.

One After the Other

We praised our first daughter for being brave and having her tooth pulled. We made a big deal about leaving the tooth for the tooth fairy. We even celebrated with her the next morning as she counted her coins that she received in exchange for her tooth.

With this positive sequence of events, our other daughter flipped a switch and wanted her tooth pulled right away.

Unfortunately, it wasn’t ready. We tried to yank it out but with out luck over multiple days.

A few weeks later her tooth was finally ready and it came out with much fanfare.

It was funny to us to see the dramatic change in behavior over just a few days just because of how things turned out for her sister.

Which Tooth is First?

Our girls’ first teeth to fall out were on exact opposite sides of their mouths.

We are pretty sure we have mirror image twins but how they lost their teeth was another evidence of this.

Have fun with the loose tooth journey!