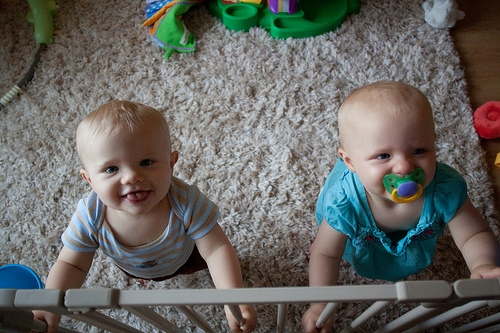 I think back to our twin daughters. Our girls were interacting with each other by about six to eight months, so your girls, if they’re already 10 months old, they’re probably on the verge of doing so as well.

Often, infants tend to be in their own little worlds interacting with what’s directly in front of them and then they completely ignore their sibling, even if the sibling is right next to them or even touching them. Keep in mind that every twin is different and they will come around in their own due time. One twin may therefore be more interested in the other before that feeling is returned.

Having your twins interact and play with each other is a two-edged sword. While it is extremely cute and fun to watch, be prepared for the inevitable moment when both twins want the same toy at the same time. This will lead to physical interactions like grabbing or hitting that you’ll want to try and redirect to more positive behavior.

So keep your eyes open because your twins will probably be interacting with each other before you know it. It will likely be in a situation that you weren’t quite expecting.

This question was originally addressed on the Dad’s Guide to Twins Podcast Episode 56: Good Sleep During Twin Pregnancy, Supporting Your Spouse, Twin Interactions.

4 thoughts on “When Do Twins Start Interacting with Each Other?”